Lately, Patanjali has been a grand success in India FMCG market with a staggering valuation of ₹3,000 crore (US$450 million). Many are already trying to reverse engineer the strategy adopted by Team Patanjali and Baba Ramdev to crack the domestic market.

Recently, we heard that they are planning to launch Jeans too. Though the product’s origin is foreign which is against the “Swadeshi” principles preached by Baba Ramdev aggressively.

The concepts of Patanjali Ayurvedic Condoms?

Who knows, they may enter in condom’s market and may come up with innovative. Here are some concepts we propose for early adopters! Have fun!! 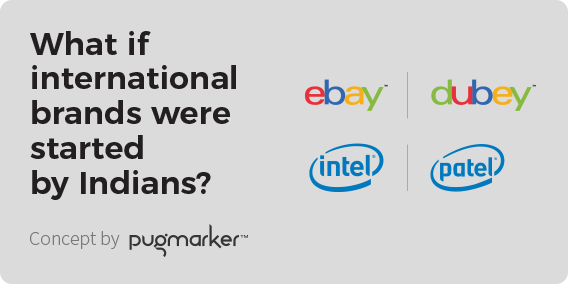 The ‘Make in India’

“Make in India” is an initiative by Government of India. The Prime Minister,
Mr. Narendra Modi has launched it in 2014 to motivate the national as well as
multi-national companies to manufacture their products in India. As a result, story behind below concept started.

What if ‘Make in India’ started way earlier?

One fine day at PugMarker, we had the conversation about “Make in India’s” positives and contribution for Indian entrepreneurs as well as new startups. The fruitful discussion went around 2-3 hours. Well, there has to be a funny outcome if we seriously delve in something, our creative instinct popped out. We thought, what if ‘Make in India’ initiative had been implemented way earlier? Here are few hilarious concepts.

The thought was, if Indian entrepreneurs had started big companies like ebay, Intel etc then what could have been their names? Indian first generation of entrepreneurs named their company after their surnames. The biggest companies we have like Tata, Bajaj, Birla, Godrej etc, considering the fact, we listed down few of the foreign companies and re imagined their logos with a twist 😉

What if eBay started by Mr. Dubey? and how their logo would look like? Same as what if Intel was started by Mr. Patel? Why not to consider Google, the biggest search engine started by Mr. Duggal? Also, what if we were way ahead than Japanese? How Canon would have looked like? What if Bentley started by Jaitley? …and there it goes..whrooommmm!!! What if Ducati started by Gulati? No guesses please! What if Rexona started by Saxena? Same as What if Nestle started by Bhosale? What if Dell started by Tandel? and how their logo would look like? What if Honda started by Handa? I know it’s too close 😛 Same as what if Paypal started by Gopal? Too Indian, isn’t it? What if Lay’s started by Ray? Still yummy right? What if Jeep started by Deep?